Rehabilitation of Beretania Street, Unit 64-R is a $9.4 million dollar project with the City & County of Honolulu. The project initially consisted of reconstruction of existing asphalt / concrete roadway with a new 9 inch section of asphalt pavement.

During preparatory work, shallow undocumented utilities were found under the old asphalt / concrete roadway. RHB worked closely with the City & County of Honolulu in the redesign of the project to a 3-inch section of asphalt pavement that would avoid the shallow utilities and still provide the public with a much needed improvement to the existing roadway.

Being a main thoroughfare for the city of Honolulu, public involvement and maintaining access to homes and business along the route added to the complexity.

This project is anticipated to be completed by the end of 2017. 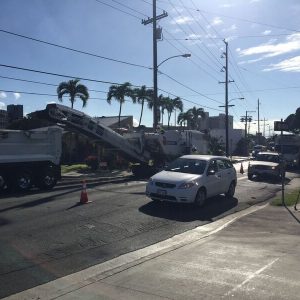 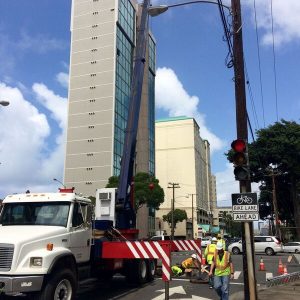